What?! This was produced in 2008? But it sounds like original Seventies music! Well, yes – true – the instrumental recordings of the orchestra and band are indeed from the Seventies. The Mufuti Twins found some tapes in a pile of bulky waste (“sperrmuell”) on the pavement. And that’s where the quite unusual story of this CD production begins. 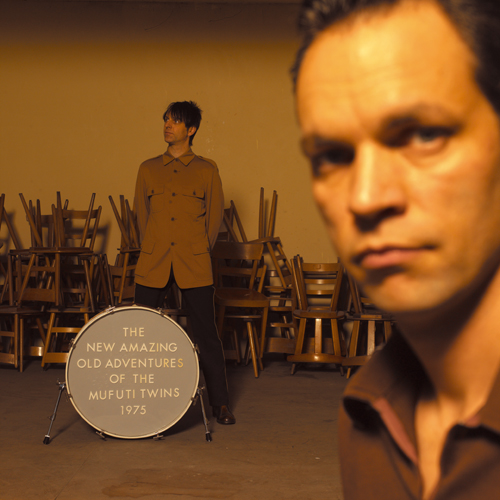 Christopher Kochs and Markus Mehr, the Mufuti Twins, salvaged these mysterious tapes and started rearranging the recordings in their studio. Christopher Kochs wrote some lyrics and sang them in a perfect crooner and entertainer’s voice and the Mufutis together added percussion, guitar, backing vocals and harmonica – all newly edited and remastered.

During the almost archeological and detective process of establishing the legal rights of their “treasure”, the Mufutis got in contact with two indisputable heroes of Seventies movie soundtracks well-known to many Germans – Peter Thomas (“Space Patrol”, “Edgar Wallace”) and Gerhard Heinz (“Schoolgirl Report”). Both were thrilled by the Mufutis’ project and provided them with some of their own compositions – to be reused and treated in genuine “Mufuti style” as Peter Thomas puts it.

The secret of the Mufuti Twins’ working method lies in the stylistically confident choice of the music titles and also, undoubtedly, in the fact that the Seventies sound of the original tapes with their contemporary composition style were left untouched and therefore safe from stylistic “adulteration”. The existing material was carefully handled, developing it from instrumental soundtrack to nonchalant entertainer-songs.

And the rich resource of the six-page digipak comes with the same style and confidence.

Stereo [Nr. 8/08]: “The Mufuti Twins beam us back in the 70s where happy feel good songs between easy listening, softporn score and swing – in the original sound! – await us! Great idea!”