View cart “Mondo Sangue – No place for a man” has been added to your cart.
Sale!

Believe it or not, it’s been nine years since the Kilaueas released their previous album “Profesor Volcanova” (CD/LP, 2005 Allscore). They spent those nine years frequently touring, moving to Berlin and finally writing 16 sophisticated instrumental music pieces. In 2014 – at last – the German surf music legend has once again been in the studio for an extensive recording session. As a result we now proudly present the release of their masterpiece „Wiki Waki Woooo“.

This new Kilaueas album will redefine surf music worldwide. Its 16 original compositions run the gamut of recent surf rock. Once more the Berlin based band fulfills its self-defined genre “reverb drenched magmaphonic high energy instrumental surf music”. From the Vatican over Bagdad into the Arctics: bikinis, secret agents, space ships and hurricanes – the four men from the Hawaiian volcano play with the rock’n’roll clichés as excessively as they do their instruments. We mustn’t forget the high-speed staccato guitar picking of “Surf Demon”. 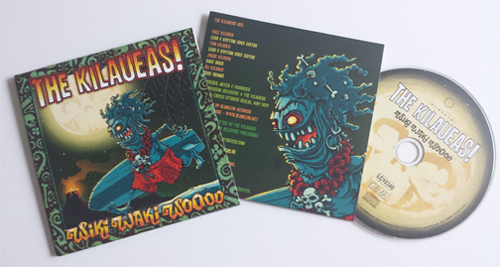 Both the cd and vinyl have a monstrous retro comic art cover. The premium 180g vinyl comes along in solid 350g cardboard covers and lined inner sleeves, the cds are wrapped in mini-lp-covers plus inner sleeves.

The release will be celebrated exceptionally in the heartland of surf music with a California west coast tour in August 2014. Check it out!