View cart “Rework – pleasure is pretty” has been added to your cart.

Arrivederci Cowboy!
A stranger, called “the Portuguese” rides into a town…
But what if he only finds women there?

The story begins like a classic spaghetti western from the early 70s, and becomes a “No Place for a Man”. MONDO SANGUE, the German soundtrack duo, comes up with another homage to the Italian genre cinema. And as the name MONDO SANGUE suggests … it gets bloody.

After their debut, the cannibal-film soundtrack “L’Isola dei Dannati”, MONDO SANGUE dedicate their second album “No Place for a Man” to the spaghetti western, tipping their hats to the great composers with influences from other genres of the late 60s and early 70s.

MONDO SANGUE once again express their love for the pathos of opulent Italian film music with this album, beautifully illustrated by Sue Elderberry. The 180 g vinyl LPs are limited to 666 pieces and hand-numbered. Each LP comes with an autograph card signed by vocal duo Cristina Casereccia and Alberto Rocca and a download code.

CINEMA RETRO [April 2018]: “The score is a passionate and honest tribute to the iconic genre soundtracks of the past. The influences are certainly there, from Ennio Morricone to the late great Franco De Gemini, for whom the album is quietly dedicated. There is a great deal of tradition to be found within the album tracks…. There is obviously a great deal of love gone into this release and it clearly shines through. No Place for a Man is an excellent production that should be both respected and applauded.”

MOVIE MUSIC INTERNATIONAL [March 2018]: “NO PLACE FOR A MAN, contains just about every sound, every technique and an array of styles that all have appeared within the genre of the SPAGHETTI WESTERN at some point or another, it pays homage not only to the genre as in the movies, but it also pays a loving and dedicated tribute to many of the composers who were responsible for fashioning the sound of the ITALIAN made western. When one listens to NO PLACE FOR A MAN, one can hear, snippets of racing and energetic Nico Fidenco, classical sounds and romanticism in the style of Carlo Rustichelli, grand impressive pieces in the style of Francesco De Masi and Luis Bacalov, as well as a foundation of strong themes that at times become almost operatic and evoke memories of the classic western scores of Ennio Morricone and Bruno Nicolai…”

DUSTY GROOVE [June 2018]: “a really well-done homage to the vintage western soundtrack modes of the spaghetti generation – served up with instrumentation and production that are completely faithful to the genre! Yet there’s also something really special going on here – a mode we might call a “no clunker” approach – as every song on the record is really great, and each of them stand out almost like the one or two key songs on older famous soundtracks.” 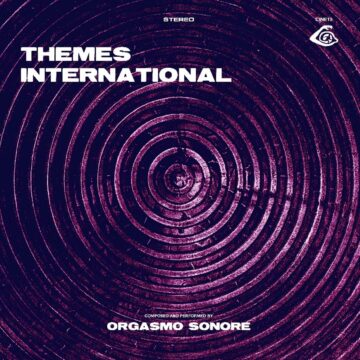